Everything You Need to Know About CBG & CBG oil, What It Does, Its Benefits, and More.

Considered a minor cannabinoid because it’s typically present in low levels of less than 1% in any particular cannabis strain, today we’re going to talk about CBG & CBG oil, or cannabigerol. While it may not be present in large quantities in most hemp strains, research into the minor cannabinoid has helped us understand that it may have benefits of its own.

Likewise, those benefits may interact or amplify CBD’s effects. Let’s dive into our guide on everything you might be wondering about CBG, as well as its potential benefits, how it’s made, and what it can do for the human body.

What Can CBG Do?

Like most other cannabinoids, there are some potential medical benefits when it comes to CBG oil. While nothing is set in stone because we need more research with human participants, we have compiled some data on the subject already. In fact, when studying cannabigerol researchers have found that it may act on specific physiological problems and systems, leading to a potential where it may be promising for medicinal use.

Based on a clinical trial where researchers observed certain cannabinoids’ effects on intraocular pressure for patients with glaucoma, CBG oil may have some neuroprotective and vasodilator properties. Researchers found CBG oil could be effective in treating glaucoma because it reduced that intraocular pressure.
Most of the clinical trials, experiments, and studies we have with findings about CBG have been performed on animals. We look forward to a future with more human participants, but the endocannabinoid systems among other animals is close enough to ours that we can get an idea of what’s possible. In a study performed on mice, we saw CBG being potentially effective in easing the inflammation for inflammatory bowel disease.

We need more research to truly grasp what CBG can do for us, but the information we do have so far indicates that CBD could have both antimicrobial and antibacterial properties. The Journal of Natural Products published a study in 2008 that revealed CBG could be a potential treatment for MRSA, or methicillin-resistant Staphylococcus aureus, which is an antibiotic-resistant staph infection.
Going back to the animal studies performed thus far, a 2015 study with lab mice found that CBG could potentially increase levels of antioxidant defence while also staying extremely active as a neuroprotectant. This implies that CBG could one day be a potential treatment for Huntington’s disease, as well as other neurodegenerative conditions. 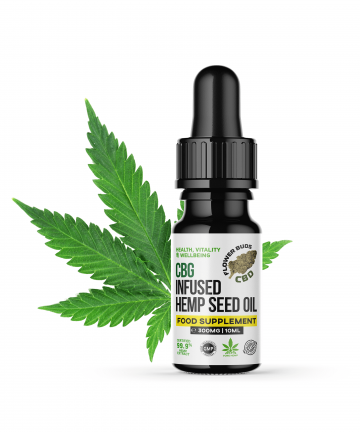 £39.99
Add to basket
How is CBG Made? Cannabis strains each contain their own profile of cannabinoids and other compounds, but not every compound that’s contained in the hemp product you receive started out in the raw hemp plant. CBG, for example, is actually what both THC and CBD start out as. A chemical parent, it functions as a precursor for three major cannabinoids: THCA, CBDA, and CBCA, though not as frequently as the first two. Most strains immediately convert CBGA into either CBDA or THCA. More CBG in a final product, the less CBD and THC, and vice versa for the other two. Only in recent years have we been able to perform crossbreeding of plants and genetic manipulation to obtain higher yields of CBG in a strain. Choosing to extract earlier in the flowering cycle can also produce more CBG than most standard stains naturally produce when it’s time for harvest.